How To Save On Organic Produce

This post may contain links that compensate me. Please read the disclosure. 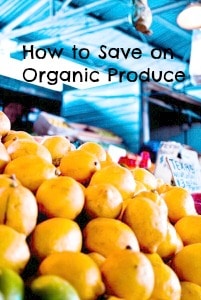 I don’t have a green thumb.  Several times, I’ve tried to grow my own organic vegetables.  I always started with tomatoes and thought if they worked I would expand.  For months I watch them grow in anticipation.  As it gets closer to being ripe to pick, something always goes wrong.  The first year, the deer enjoyed them.  The next year, they just didn’t grow.  Last year, they grew slowly and were still green when the first snow killed them.  I will try again, but in the meantime I’ve had to find other ways to save on organic produce.

Here’s how I’ve been able to save: